"In 2002, Laurent la Gamba was the first visual artist to perform a "camouflage" installation in a supermarket." Laurent La Gamba

" Trained as a painter, French artist Laurent La Gamba likewise mingles absurdity and a seriousness of intend in a series of color photographs that rely on a performative aspect. The subject of each image is an individual wearing a costume painted to match a section of supermarket display - shelves of various brands of pet food, for example. Thus camouflaged, the figures are subsumed by namebrand identities, calling attention to the manner in which we define ourselves in a commodity-based consumer culture." Kate Hackman,  Focus on Photo, Society for Contemporary Photography shows extol substance, The Kansas City Star, Nov. 2002 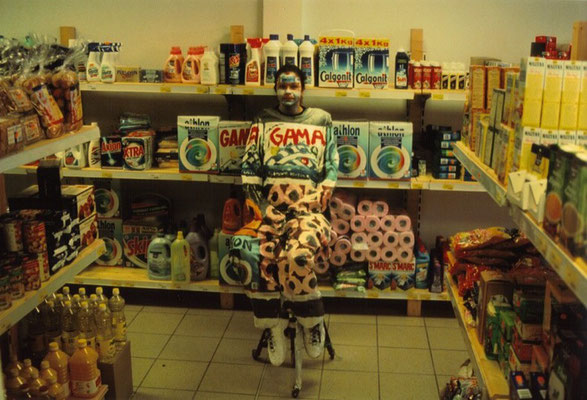 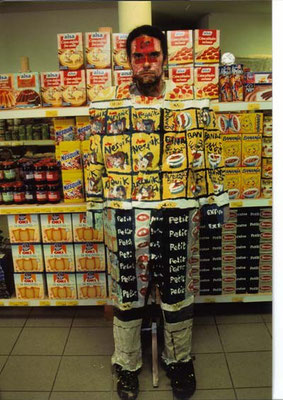 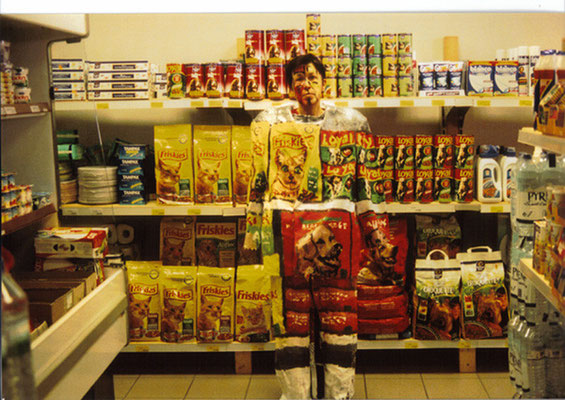 During the summer of 2003 I started camouflaging a series of people, friends, and friends of friends, who are owners of a swimming-pool in the area I live in. And then, progressively, the series has started to take a life of its own, and I have found myself with around 15 photographs representing people, all camouflaged with their pool, or, to be specific, camouflaged in front of the refrigerator that I positioned at the pool. This series reintroduces certain elements that were a content/theme in my high-gloss analysis series. Both series are introducing an element into a setting where it doesn't belong and was never meant to be a part of. Each model/photographed person is the owner of the respective pool, in the sense of him being the one to appreciate and enjoy the use of that swimming-pool, but also, in the other sense of the word, the joy of being the owner of a swimming-pool. As opposed to the high-gloss analysis, where the unexpected and foreign element of the photograph is caused by the image of a household appliance set within a landscape, two completely unconnected elements joined together, we do find connecting elements in the swimming-pool series. The consternation in this case is caused by the mental incompatibility of the displayed items. The connecting elements are to be found in the swimming-pool and the household appliance both being owned by the camouflaged person, he being the beneficiary of the use of both. However, the refrigerator, considered to be a bare necessity and present in practically every household, is positioned in front of a pool, a pure luxury item with the exclusive task of serving as a status symbol and a source of pleasure/joy. It is this underlying contradiction that causes the onlooker to be startled. 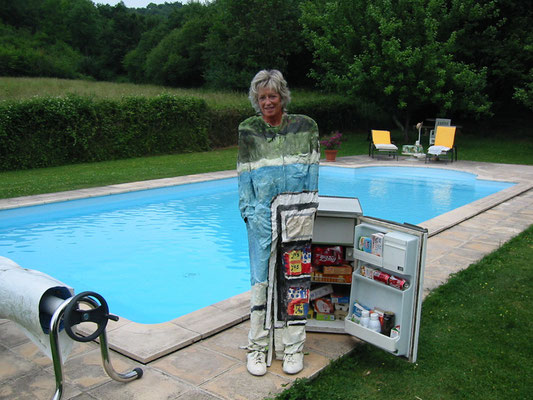 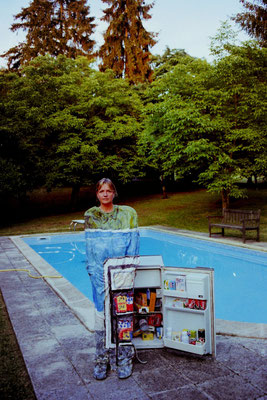 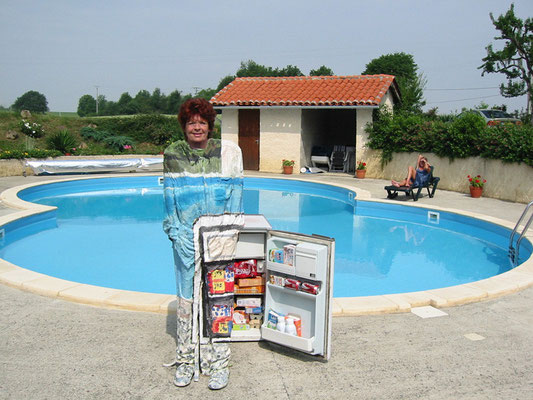 My "Open Fridge" series attempts to visualize the question of the body in its relationship to the machine - a relationship between the body and the particular sort of object which a machine is, and whose symbolism has often been put forward as a mirror of man himself. From the very first clocks up to mechanical, electrical, electronic or digital 'machines' one uses daily (washing machine, dish-washer) there has been, on some level, a longing to draw a parallel between man and the machine if only because of the way body and machine work (pumping, ticking, beating emptying, filling, breaking down, dying…). My work suggests a common mold for man and machine, a pictorial translation of this unnatural relationship. These installations remove the machine from its environment and link it to the 'other' body.

In his 1955 article entitled "Freud, Hegel and the Machine", Jacques Lacan revealed and analysed how comparing a body to a machine was a mistake. Breaking down the body to analyze or fix it as if it were a machine (something that according to Lacan went back to Huyghens' clocks) enabled some people to underhandedly compare the kinetic energy of the body to the mechanisms of the machine. The Open Fridge series focuses on the mirage of man's body being or striving to be well-oiled and homeostatic. With the Open-Fridge, (Open cooker, Open washing-machine) project my aim was to create a man/machine group and to show that only this obscene hybrid is well-regulated and balanced, has no highs or lows, simply put: has no symptoms…" 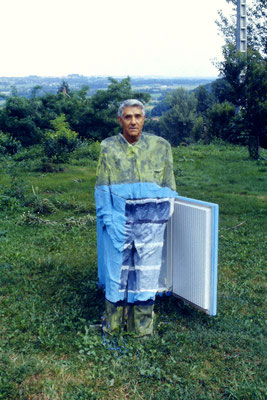 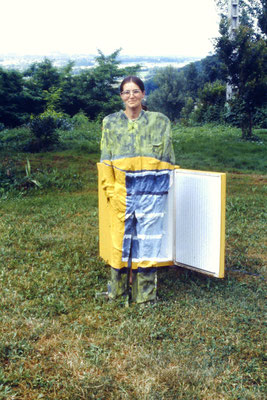 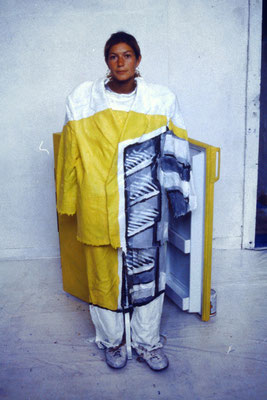 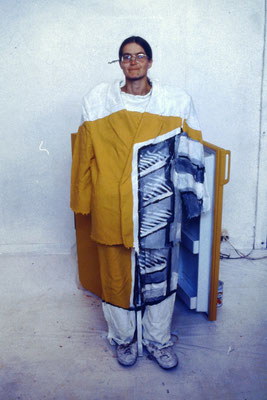 High-Gloss is a term that refers to a certain type of brilliant and shiny photography, shiny both as in the sense of shiny on the surface as in having a superficial content. This series of photographic installations has been envisioned as a simulation/mimicry of landscape photographies.

Each photograph shows a panoramic landscape which incorporates a foreign and unexpected element with a somewhat startling effect on the onlooker. The merged human face is a relic and remains immovable while the rest of the body is camouflaged. What is traditionally displayed in this kind of high-gloss photography is changed in a 'revolutionary manner' by the presence of this remnant human element and it removes the evocative power of the landscape. My work takes a critical approach to the way nature is being photographed and then commercialized as a blissful place. Instead of having the presence of the artist devoted to the display of the beauty of the landscape scenery, the artist figure is made part of it. Consequently the artist introduces, through the means of camouflage, his own image into the natural Eden landscape leaving his face as a remnant part, thus emphasizing his narcissism. In the high-gloss series the artist is dissolved and represents something like a mirage, using the means of the pastiche concept to realize an experimental simulacrum. 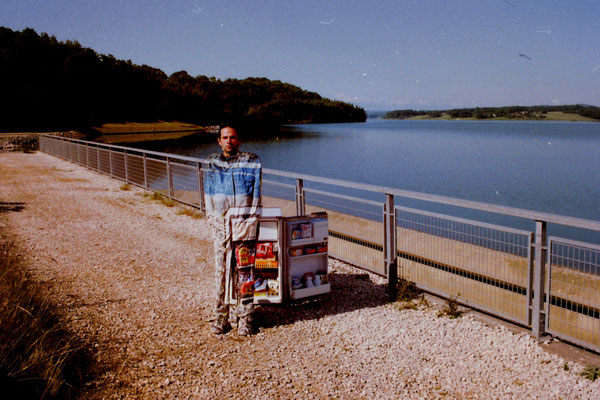 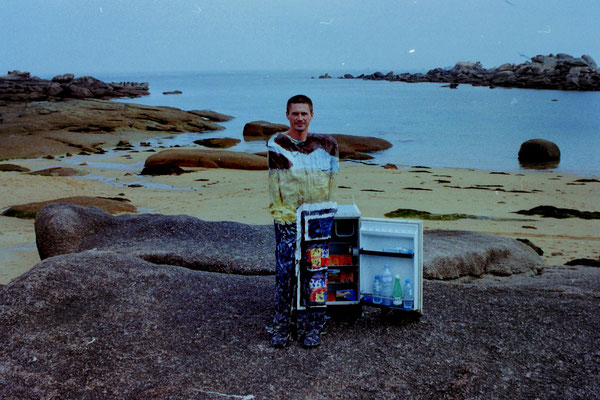 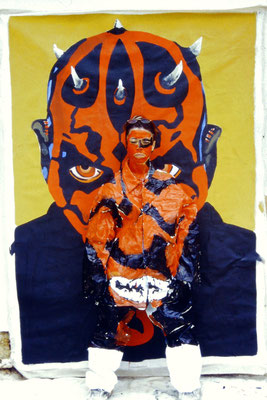 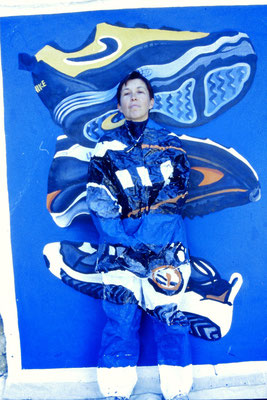 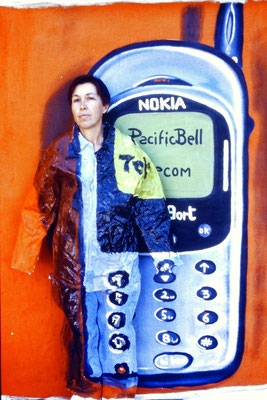 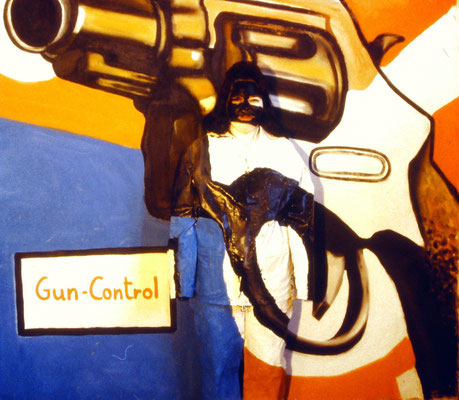 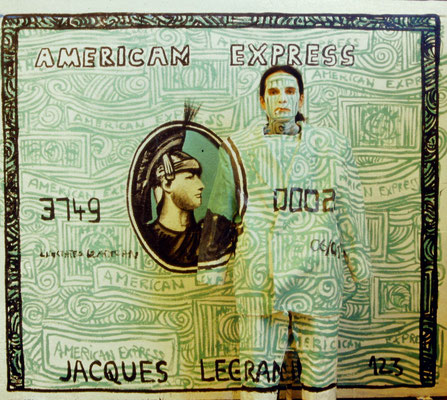 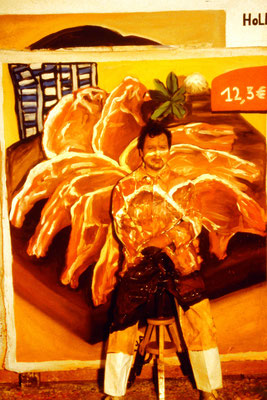 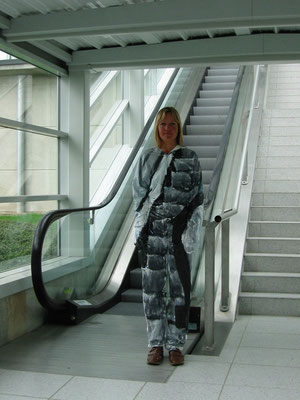 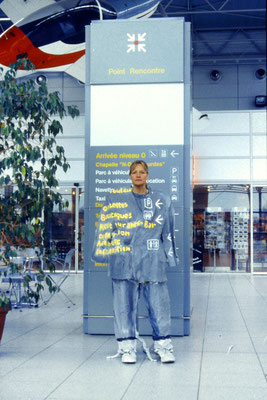 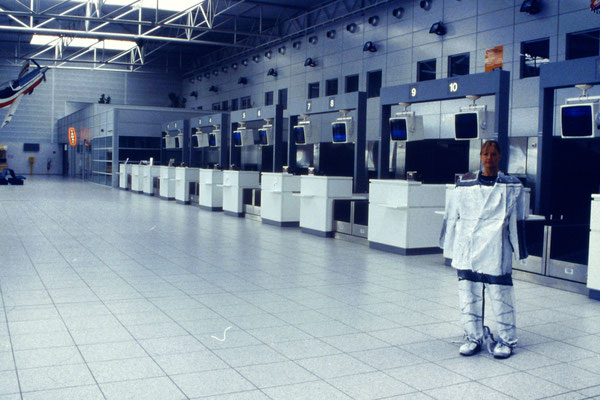 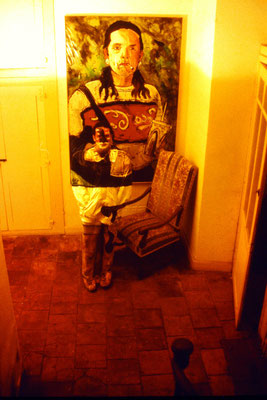 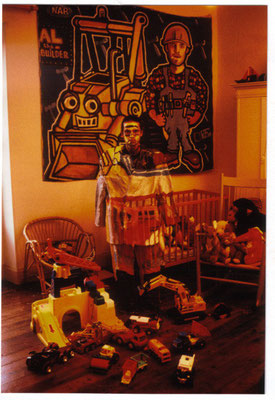 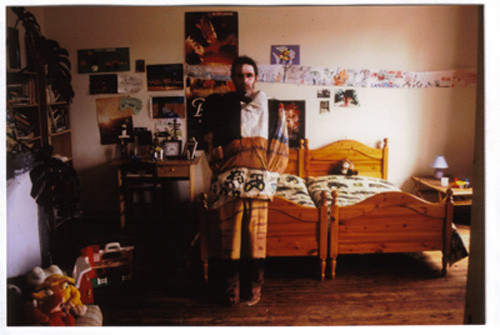 These different pro-cryptic photographies are related to the painting technique, in other words a technique which uses all the different shades of one particular colour from light to dark. In ancient times known as "monochromas" this technique essentially went through a revival phase in the 18th century, being used for "trompe-l'oeil" for fresco decorations.

In 1998 the Space Museum (La cite de l’Espace) in Toulouse purchased four modules of the first MIR Station test model from the Russian government for one million US dollars. These modules were left to rot in an ex-soviet union harbour. In April 2003 I contacted the curator of the Space Museum, M. Plachez, and he kindly agreed to me carrying out 10 pro-cryptic installations (camouflages) inside the four modules Kvant, Kvant 2, Kristall and the core module. The results of the installations are captured as photographs and videos. My “Inside MIR” project plays on the chromatic mergence of a person into this Russian technological environment through the means of camouflage.